Route to the Top 2020: Interview with Jerry Liu, president of Cargill China 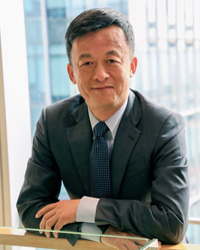 Jerry Liu was appointed president of Cargill China in June 2018. His previous roles include being the general manager of Cargill Biochem Co Ltd—the largest asset of starches and sweeteners China—and the managing director of the Cargill Starches, Sweeteners, and Texturizer, China. He holds an MBA from the Wharton School of Business and earned his bachelor’s degree from Nankai University in Tianjin, China.

Heidrick & Struggles: How has your organization has been impacted by the COVID-19 crisis, and how do you see a return to growth?

Jerry Liu: The pandemic caught us by surprise, particularly in terms of the length and depth of the crisis. No one expected it to last beyond the first half of 2020. And, while the situation in China got back to a mostly normal pace, if you look at other countries, they are still in the middle of the crisis. Our organization has a good level of resilience and almost all our operations resumed in March; we have also seen demand increase.

Heidrick & Struggles: What would you say your biggest challenges will be in the next two or three years?

Jerry Liu: The world is becoming more complex and rules are changing. There is a narrative around decoupling from both a political and economic perspective. At the same time, even before the pandemic, we were seeing consumer behavior changing, with the younger generation constantly asking for new products and being more aware of health and safety implications. As a large, multinational corporation, we have to understand that what made us successful in the past 5 to 10 years will not be a winning formula for us in the next 5 years. The biggest challenge for us will be understanding how to manage all these uncertainties.

Heidrick & Struggles: Longer term, is there anything else that you see as the overriding challenge?

Jerry Liu: We have to ask some fundamental questions. Over the past couple of decades, we have seen some success from globalization and we will have to verify if this success will continue. There are many geopolitical trends and events that will make leading a global organization very difficult in the next decade.

Heidrick & Struggles: How do you think the role of the CEO will evolve over the next three to five years?

Jerry Liu: In the past, things looked a little simpler: you look at history, you look at the possible future, you set your strategy, and then you focus on the execution of your strategy and finding the right people to help you implement it. But with the uncertainty we have at the moment, you cannot just develop a strategy and look forward to executing for the next five years. You have to be prepared to be more reactive to what happens in the world around you and you may need to make more short-term adjustments to be more agile and to face the challenge. So that's a little bit of a different skillset and mindset I think the CEO or the managers need to develop.

Heidrick & Struggles: Do you think there's anything particular about the way the COVID-19 crisis has unfolded that has shaped the role of the CEO?

Jerry Liu: During the past couple of years, some companies put tremendous effort toward more centralization and standardization of practice in order to leverage skills and operate more efficiently. We have seen how the world is more fragmented in how countries responded to the pandemic, and there will be more balance needed between global centralization and agile local responses. To be able to think globally and at the same time act more like a local player will require a change of behavior and mentality and it will be the key for success in the future.

Heidrick & Struggles: How do you think the skills required from CEOs will change in the next three to five years?

Jerry Liu: The most valuable skill in the future for CEOs will be the lifelong learning skill, along with the understanding that you can never rely on only the one or two things you did best in the past. You must learn from the best players how to look into the future and beyond your own industry and how to be more adaptable to this changing world. Clearly, we see the rising importance of digital, data analytics, and artificial intelligence, which will allow CEOs to make decisions that are based on reliable data as well as their best judgement. We are still at the early stages of implementing these tools but are observing other sectors and identifying the best practices we can learn from. The other factor is that the skills needed also depend on the CEO’s personality, the type and maturity of their organization, and the challenges they are facing. The most valuable skills will be agility, learning skills, and the ability to adapt in order to lead their organizations through change.

Jerry Liu: I don’t think there’s only one answer. Having a very sound background in a similar sector will shorten the learning curve but, on the other hand, there is the downside of having a single-lens view, which might restrict you from bringing the outside in and trying something really innovative. So, it depends. Maybe for some of the more traditional industries, where there is less dramatic progress in terms of new technology and business models, it might be good to bring in someone with same-sector experience. But for some sectors or businesses where there is dramatic revolution in technology and business models, the lack of a cross-sector background might be less helpful. So, it very much depends on the stage of the company, the challenge, and the nature of the industry.

Heidrick & Struggles: If you were to think about the person who will succeed you, how would you see the profile of that person, ideally?

Jerry Liu: I would like to see someone with great passion, who loves what they are doing, and are very committed to the company. Having sector experience is a plus, not a must. They would also need to have great people skills and be committed to developing younger talent and building a strong leadership pipeline for our organization. The future leader would also need to understand customer preferences and hopefully interact more with them and have a deep knowledge and insight into our market.

Heidrick & Struggles: Do you think digital skills and experience is a must-have for future skills or is building the right team with digital experience more important?

Jerry Liu: The CEO doesn’t have to be an IT expert. He or she just needs to have an open mind and the skills to recruit the best experts in the field. We have learned that having the right people with the right skills is more important than having the latest digital tool or process. We can never underestimate the importance of the wealth of talent that people can bring to an organization. But your job is not done when you hire your talent; you also have to learn how to develop and retain it, because it’s a very competitive market for digital leaders.

Heidrick & Struggles: How can the board help CEOs and their executive teams be more effective?

Jerry Liu: Board members, especially independent directors, come from different backgrounds, and often, the CEO and their executive team will have likely been in their current sector for a while and developed their own standards. Those standards could be too low compared to other sectors. So, as a board member, you have to find a way to open a door or a window to let the management team see the outside world and absorb the possibilities and new best practices.

Heidrick & Struggles: Our research suggests that companies with a clear purpose on which the whole organization is aligned have better financial performance. How do you think about the role of purpose in your company and how do you build alignment around it in your organization?

Jerry Liu: Fortunately for us, because we are in the agricultural and food industry, our business is pretty much in line with our purpose of becoming the global leader in nourishing people. But that is perhaps only half the job done. Beyond aligning your business to your purpose, you have to set up good examples to demonstrate to your employees that we are delivering on that purpose, not just stating it. There is still a long way to go to make sure the message is heard all the way down to the floor, and that every employee behaves in a manner that shows they believe in our purpose.

Heidrick & Struggles: Sustainability is featured prominently on the Cargill website. What are the main issues that your company is addressing in this space?

Jerry Liu: For Cargill, it’s mainly about forest reservation and feeding the world, but that manifests differently in different parts of the world. Different owners around the world have different priorities depending on local needs. For China, in the short term, our priorities are protecting the environment, dealing with water scarcity, and supporting the low-income population. This aligns with the government’s priorities and that makes the efforts’ impact greater.

Heidrick & Struggles: Would you be able to give us an example of a sustainability initiative that Cargill has in China?

Jerry Liu: One of the key lessons we’ve learned is that you get better results when you combine your best business practice with your sustainability efforts. We have these joint efforts with other multinational companies to try to help farmers improve their farming practice by using less fertilizer and water and still improve their yield. We are also addressing the issue of food security and are donating tools and technology to help farmers plan efficiently and avoid waste.

Heidrick & Struggles: How do you think about diversity and inclusion in your organization?

Jerry Liu: Out of our top eight business leaders in Cargill China, three were women, and the leaders of our key functions are majority women, so we believe we are doing well from a gender perspective. We are also trying to broaden the definition of diversity beyond gender to focus more on inclusiveness. We believe you have to include age and experience, as the end game is to have different perspectives and different opinions to bring fresh ideas into the organization, thus making your organization more powerful.

Heidrick & Struggles: Is there any particular experience or a person who had an impact on your career?

Jerry Liu: I spent six years being a general manager in a remote location. That experience was quite helpful in bringing me where I am today. When I took over the role, the business had suffered big losses that I had to turn around, and in order to do that I had to build a team there. Having a senior mentor was also incredibly important. He invested time in me, teaching me and helping me through both success and failure, helping me find the right direction and grow in the organization.

Heidrick & Struggles: What would you like your legacy to be?

Jerry Liu: I think that there will be three things: a strong team capable of carrying the business forward, a significant business growth, and a big financial impact for the business.

To gain more insights on today’s CEO, see the full Route to the Top 2020 report.

Route to the Top 2020
By Heidrick & Struggles 19 Nov 2020
The future is now: How leaders can seize this moment to build thriving organizations
By Yulia Barnakova, Steven Krupp 17 Dec 2020
From blame to gain: Leading with agility in a crisis
By Steven Krupp 02 Apr 2020
Focusing on sustainability to gain a strategic competitive advantage
By Heidrick & Struggles 07 Dec 2020
Article
Publication
Event
Video
Podcast
See All