Excellence is the next five minutes

Excellence matters now more than ever. As the writer Hugh MacLeod said recently, “Creating excellence is not a job. Creating excellence is a moral act.” In different ways, the work we’ve both done over decades highlights the importance of putting people first to create organizations that excel. The basic idea of creating a humane culture, taking care of your people and preparing them for tomorrow, getting everyone to play the innovation game full-time, and offering products marked by unabashed excellence was and still is the bedrock.

The way to do so is by what Tom has long called “managing by wandering around,” building a human community among employees and leaders. Soft has always been hard, but now, when putting people first is even more important, how does it work when wandering around isn’t possible? How do you “wander” when interactions between leaders and teams are virtual, scheduled, or video-driven? Is it possible to truly build and maintain human community within the limitations of social distancing and shuttered offices?

Yes. Managing by wandering around is a state of mind more than a physical act. It takes leaders who fully engage each team member and let their humanity and give-a-damn-ism show, leaders who worry more about how individuals and their families are coping than making it through every agenda item. In the current crisis, we have seen the humanity of leaders make values and cultures real, moving them from what is stated to what is lived daily. And we have learned that letting humanity show through is the single thing leaders are doing that has the greatest impact on the health and well-being of individuals, teams, and organizations. Leaders and teams have been at their best as they’ve found the right balance in priorities between home and work, between well-being and a drive for performance. And all this has reinforced, spectacularly, that these are not mutually exclusive priorities, that a focus on humanity will surely drive a focus on results.

Around the globe, we celebrate daily the heroism of first responders, healthcare workers, and employees at the front line whose commitment to purpose and drive to serve every day are at the very heart of excellence. Now, with reentry and reopening of businesses occurring with some pace, we are also seeing the daily commitment of every employee who has recently been visible only through the glare of the screen, as they step up to serve customers and support team members, with the same focus on excellence. 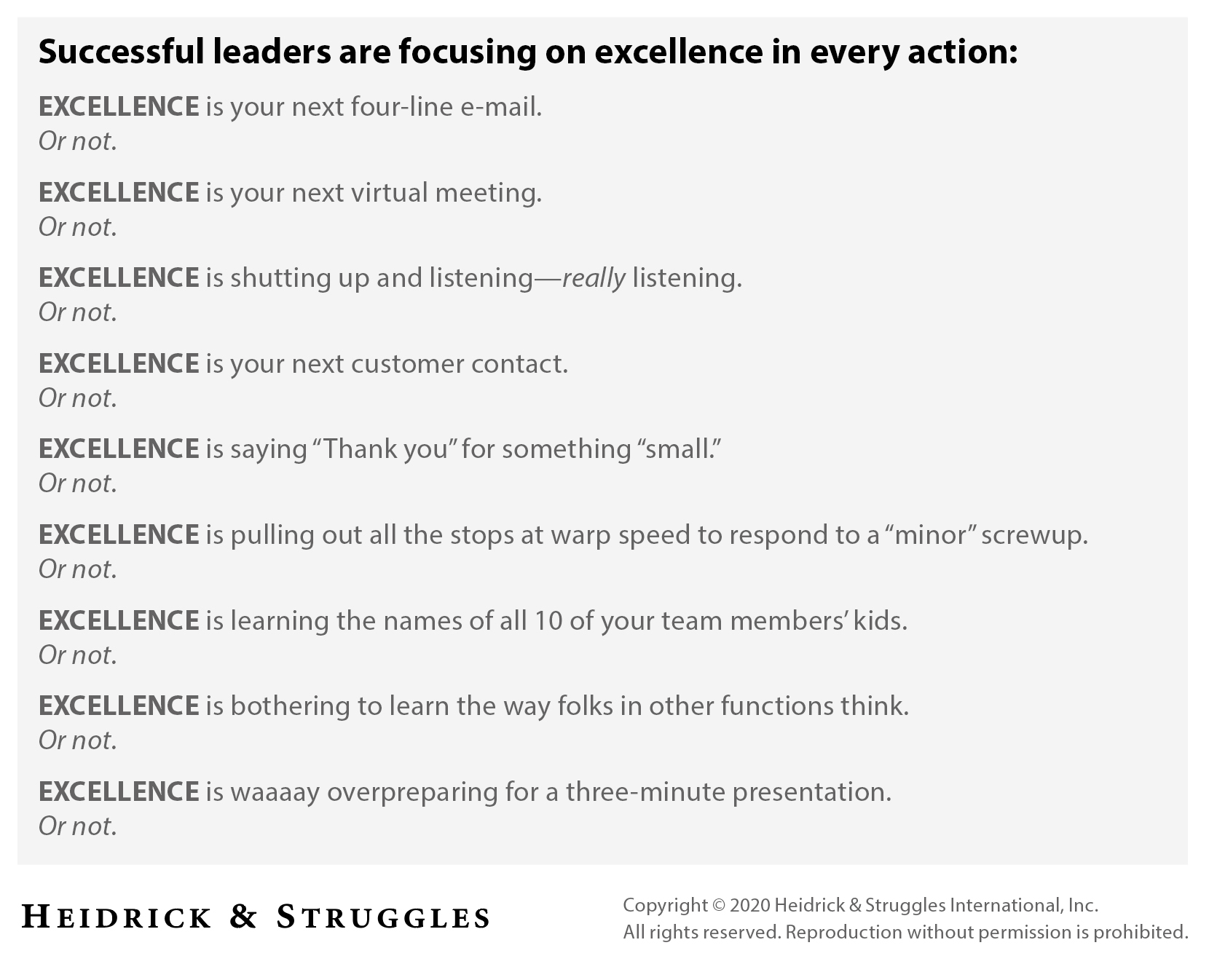 In the end, excellence is the next five minutes—or nothing at all.

Rose Gailey (rgailey@heidrick.com) is the leader of Heidrick Consulting’s Center of Excellence in Organization Acceleration and Culture Shaping; she is based in Heidrick & Struggles’ Costa Mesa office.

Tom Peters is coauthor of the groundbreaking management book In Search of Excellence. His most recent effort is The Excellence Dividend: Meeting the Tech Tide with Work That Wows and Jobs That Last (Vintage Books, 2018). Tom’s bedrock belief is “Execution is strategy—it’s all about the people and the doing, not the talking and the theory.” In November 2017, Tom received the Thinkers50 Lifetime Achievement Award. He can be reached at tompeters.com.

Leading through the crisis by counting on purpose and values
By Rose Gailey 31 Mar 2020
How leaders can help workers thrive now—and build a foundation for growth
By Emily Amdurer 12 May 2020
Putting the customer first—for real
By Karen Rosa West, PhD 06 May 2020
A company ahead of its time: Insights from a 100% virtual business
By Heidrick & Struggles 29 Apr 2020
Article
Publication
Event
Video
Podcast
See All