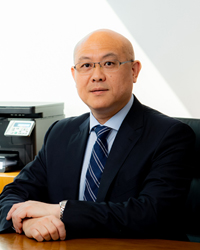 Shengpo (Samuel) Wu was appointed president of Whirlpool Asia and joined Whirlpool’s executive committee in February 2017. He was previously the president and chief executive officer, Asia Pacific, of Osram GmbH and has held regional and global executive positions at General Electric and Honeywell.

Heidrick & Struggles: How do you think the role of the CEO will evolve over the next three to five years in response to the board and stakeholders’ expectations?

Samuel Wu: The answers are different for a CEO of a publicly traded company versus a privately held company, as the CEO behaviors are not the same. From a publicly traded company perspective, of course the CEO’s number one priority is to be responsible for shareholders, especially long-term investors, who want the company to continue to grow but also deliver short-term returns.

A key part of the CEO role will increasingly be to anticipate how macroeconomic trends or unexpected events will affect the business and to prepare for different scenarios. I would highlight three key areas that will be increasingly important in which to have foresight: market dynamics, especially when it comes to new technology such as artificial intelligence or automation; consumer behavior changes, if you are in a B2C business; and the probability of a very different economic cycle.

The permanent foundations of the job never really change, starting with the focus on people and strategy. But besides the core role, there are other issues that are increasingly cropping up on the agenda, particularly sustainability and diversity and inclusion. The best B2C companies listen to their consumers, who represent different cultures, races, genders, LGBTQ issues, and other characteristics that you have to factor into your approach.

Heidrick & Struggles: What skill sets and experiences do you think CEOs will need three to five years from now?

Samuel Wu: The foundation will still be the same, as CEOs will have to continue to deliver shareholder value, design and implement the right strategy, and anticipate future disruption or change. But on top of that foundation, CEOs will have to understand current technologies and digital beyond e-commerce. For example, the ability to build your own sales or distribution platforms to facilitate direct transactions with your customers—and not rely on Alibaba or Amazon—is relatively new. This opportunity suddenly became viable, but CEOs may not really know how to do this. And to stay competitive, they either have to develop that skill set or recruit expert talent to cover those gaps.

Heidrick & Struggles: How do you see digital skill sets reflected in the CEO role now and in the future?

Samuel Wu: I think we need a very different talent base within the company at all levels, whether at the technical or the leadership level, to really have the so-called digital skills we need. “Digital” is a loosely defined word that depends on how each company looks at it. My personal view is that it has two key components: hardware and software, on one hand, and consumer behavior, on the other. If you look at consumer behavior, there are marked changes. The experience that people used to have in stores has moved online; this has been driven by the younger generation but adopted by a segment of the older ones as well. And in this context, I’m not sure that many CEOs and companies have the right acumen and resources to take full advantage of the new consumer behaviors. I think that these two categories of skill sets are still pretty scarce in many big corporations.

Heidrick & Struggles: Our research found that about 70% of CEOs of the largest publicly listed companies are internally appointed to the role, and a large majority of them have previous CFO, COO, or even CEO experience. Do you think that’s going to change in the future? Do you see a wider range of routes to the top role emerging?

Samuel Wu: In my view, there are the evergreen fundamentals that boards are looking for in a CEO. The first one focuses on credibility and trust, and a resume and interviews can take you only so far when it comes to trust. To a large degree, you build credibility only by observing people internally over a number of years, and ideally within different contexts.

The second one would be experience and skill set, which reflects the evolution of the business over different generations. In the age of globalization, companies prioritized leaders with global experience, but for the next few years, digital acumen may become more relevant. So that would become an evolving factor, where experience is still important but a specific skill set varies from generation to generation.

A third pillar is strategic capability. A CEO’s job is not to manage the day-to-day; it is to best position the company for growth and to weather any incoming headwinds.

And not in the least is people capabilities to build a strong team, drive diversity, and listen to stakeholders.

These would still be the four basic foundation pillars in succession planning. So when it comes to internal versus external appointment, the first choice would be internal, but it does depend on the skill sets you have in your succession pipeline.

Heidrick & Struggles: Could you share one of your most formative experiences or talk about a mentor-like figure who helped shape your career?

Samuel Wu: I think having a multicultural experience was critical. I was born and raised in China, obtained my master’s degree, and joined GE in the United States, where I worked for 10 years before coming back to China. I also spent a lot of time in Europe for different assignments. Secondly, I started from the technical side as an engineer and eventually moved up through marketing and sales roles and then P&L roles.

The one position that taught me a lot was an M&A role in China, which was interesting, as after 10 years at GE I was used to one culture, one internal language. Then we bought a company in China with a different management style, different processes, and a very different culture. The challenge was to integrate the company into the GE ecosystem from day one while still keeping the local features that made the acquisition successful. That experience helped me deepen both my multinational culture experience and my functional expertise.

Heidrick & Struggles: In your experience, what kind of resources or talent would you need to do your job more effectively?

Samuel Wu: It depends on how I divide my tasks. On the strategic front, it’s very important to have the right marketing resources to help you really understand market trends and develop foresight, how to develop a strategy to capture the opportunities and mitigate the risks, and how to invest smartly. On the people side, it comes down to a talent strategy that responds to your organizational structure. That means finding the right people for the right roles, and sometimes letting talented people go who cannot fit into the new structure. When it comes to operations, you need to make sure you have the resources necessary to deliver your day-to-day business.

Heidrick & Struggles: To what extent does your company’s culture help or hinder your effectiveness as a leader?

Samuel Wu: Culture can help or hinder my leadership effectiveness immensely. For example, I see a big difference between more direct cultures, such as the one in the United States, and a consensus-building culture that is typical in many European countries. That can translate into a performance versus consensus operating model and can be reflected in everything from strategy, decision making, feedback, and performance management. If you have a consensus-driven culture and not a performance-driven one, over time you can get left behind.

In my organization, we embrace strategy together, we drive the execution flawlessly, and I hold everybody accountable to that. And not in the least, we build a high degree of trust, starting with the foundation of being open and direct. That’s how I form the culture.

Heidrick & Struggles: What would you like your legacy as CEO to be?

Samuel Wu: Our goal is to become the number one multinational brand in China in a few years, and that would be a great legacy.

Route to the Top 2019
By Heidrick & Struggles 09 Jan 2020
Route to the Top 2019: Interview with Aurizon’s Managing Director and CEO Andrew Harding
By Heidrick & Struggles 23 Jun 2020
The clock is ticking on CEO succession: is your board ready?
By Bonnie W. Gwin, Jeffrey S. Sanders 19 Mar 2020
Building digital dexterity in your leadership team
By Yulia Barnakova, Steven Krupp, Scott Snyder 15 May 2019
Article
Publication
Event
Video
Podcast
See All